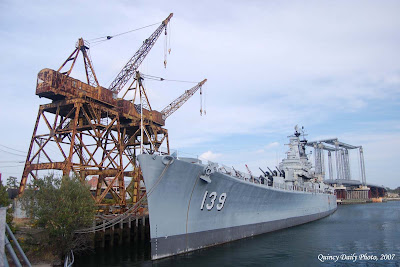 The USS Salem was built in Quincy by the Bethlehelm Steel Company and launched in 1949. She served a distinguished 10 year career as flagship of the US Sixth Fleet in the Mediterranean and the Second Fleet in the Atlantic.

She was decommissioned on 30 January, 1959 and joined the Atlantic Reserve Fleet at the Philadelphia Naval Shipyard. After being mothballed for 35 years the Salem was moved back to Quincy where she is now the centerpiece of the United States Naval and Shipbuilding Museum.
By Clueless in Boston - September 25, 2007

wonderful view on this grand ship. It's good to see it's back in service in a different sort of way now.

this photo is great! perfect angle:)

oh that is great re the ship being the museum centerpiece. and i do like how you got the whole ship in your photo, i have a really tough time with buildings...

The administration building is all that remains of Quincy City Hospital.  It will be renovated and incorporated into a multi-family 465-unit... 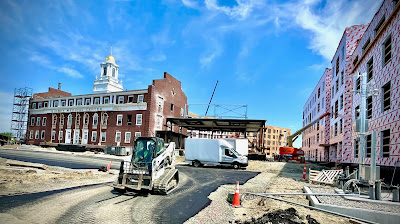