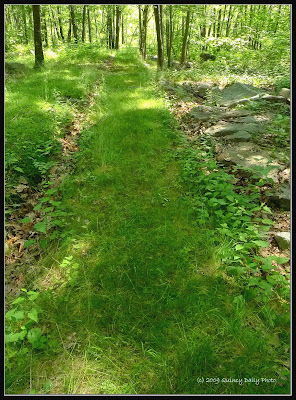 This is where the first commercial railway got started: at the end of Bunker Hill Lane. The overgrown rail bed here was once used to move massive hunks of granite from the quarry site to the Neponset River where it would be loaded onto a barge and brought to the building site of the Bunker Hill Monument. It would be a challenge to move the massive blocks of stone specified for this project. Quincy architect Solomon Willard was determined to get it done and enlisted the aid of Gridley Bryant who conceived of the idea for a rail system and got it operating by 1827.

If you enlarge the picture below you can see some of the details in a model of this railbed that is based on work done by Quincy archaeologist, Richard Muzzrole. The roadbed is essentially a dry stone wall three feet deep. The "wall" supported massive granite sleepers that are spaced eight feet apart. The first rails were wooden, but they were eventually replaced with granite ones to help transport stone loads of 21 tons or more for a distance of 3 miles. The horse drawn railway cars were loaded from the bottom so as not to damage the stone blocks. This was a pioneering design achievement which has earned this site a designated National Historic Civil Engineering Landmark. 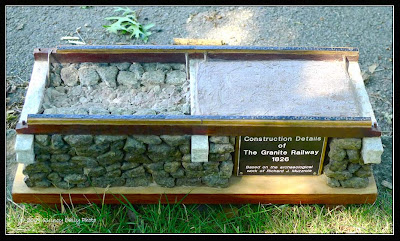 I just discovered an excellent blog post about the Granite Railway: click "Stories in Stone" to see the old rail car and find out more about this fascinating piece of Quincy's history.

Appreciate the info to go with the photo, these old spots need to be captured before they are lost. I was at the Bunker Hill monument with family a few weeks ago. We went into the museum where they had info on the building of the 'needle', but I don't recall anything on the railway. Thanks.

This is so elegant, this repurposed path through the woods.

Thanks for mentioning my blog, Stories in Stone. The blog grew out of my book of the same name, which includes a chapter on Quincy, its granite, and the railway. That chapter has a long section with Vic Campbell, who is a wonderful treasure trove of information. The book focuses on a variety of building stones from around the country.

What an interesting story. never knew that about the line. So GREEN, very Irish! Ha!

Absolutely fascinating. Well, granite you're in an historical area...but still...

Thanks for stopping by today. Come back tomorrow for another rock-solid post!

This tiger swallowtail butterfly was a delight to see pollinating the phlox bed along my driveway.